Turmeric (Curcuma longa) is extensively used as a spice, food preservative and colouring material in India, China and South East Asia. It has been used in traditional medicine as a household remedy for various diseases, including biliary disorders, anorexia, cough, diabetic wounds, hepatic disorders, rheumatism and sinusitis. For the last few decades, extensive work has been done to establish the biological activities and pharmacological actions of turmeric and its extracts. Curcumin (diferuloylmethane), the main yellow bioactive component of turmeric has been shown to have wide spectrum of biological actions. These include its anti-inflammatory, antioxidant, anticarcinogenic, antimutagenic, anticoagulant, antiprotozoal, antiviral, antifibrotic, antivenom, antiulcer, hypotensive and hypocholesteremic activities. Its anticancer effect is mainly mediated through induction of apoptosis. It’s anti-inflammatory, anticancer and antioxidant roles may be clinically exploited to control rheumatism, carcinogenesis and oxidative stress related pathogenesis. Clinically, curcumin has already been used to reduce postoperative inflammation. Safety evaluation studies indicate that both turmeric and curcumin are well tolerated at a very high dose without very toxic effects. Thus, both turmeric and curcumin have the potential medicine for the treatment of various diseases. Over all it is a good handy emergency medicine. Few of its magical properties are mentioned here. 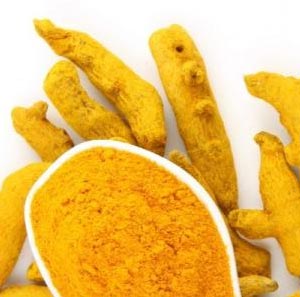 Mixture of turmeric powder and lime nullifies the toxic effect

Licking the paste of turmeric powder and 1/2 tsp of vayavidang choorna with 1 tsp of honey for 7-8 days kills worms and throws them out.

Gargling with 1 glass water in which little turmeric powder is boiled, twice a day, cures it.

Taking paste of ground or juice of raw turmeric and honey with goats milk twice a day cures all urinary problems.

Apply paste of stone rubbed turmeric on the affected part.

Taking 4-5 ground turmeric with water or honey twice a day is helpful.

Taking about 7-8 gms of raw ground turmeric and equal amount of honey with goat’s milk renders a promising result.

Putting 1 -2 drops of turmeric (by roasting 2 pieces of haldi in mustard oil) in ear, cleaning it with ear bud relieves problems.

IN A NUT SHELL

There is hardly any dish in which Indians don’t put a little bit of turmeric. The Indians for many years knew its multiple benefits and uses ranging from medicines to food.

Some research on turmeric health benefits :

Side Effects of Energy Drinks: Their Ingredients and Concerns

The Dangers of Fluoride

Is milk good or bad for you