Benefits and Uses of Castor oil

The evergreen castor plant is native to tropical Africa and India, where it may grow to a 40 foot tree. The beans contain an extremely deadly toxin (poison), which must be removes by special processing before the oil is usable.

Cautions: Castor bean seed internally are deadly poisonous but oil is not 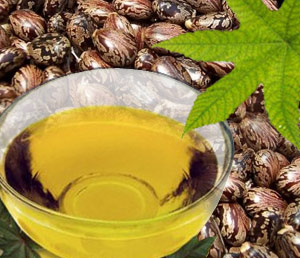 Castor is a wonderful panacea for a large number of health concerns. It is pungent and sweet with heating energy. Applied externally, it is analgesic and nervine, so it is the main treatment for nerve conditions.

Castor oil is the main treatment for vata dosha. Tierra uses it for all vata derangements, including pains, constipation and arthritis. Following the vata idea, this very special oil is used in the treatment of epilepsy, paralysis, insanity and many other nervous system disorders. Castor oil supports joint, muscle, connective tissue and skin health. It is used for wounds, trauma and minor pain.

Castor oil is the “arnica of Ayurveda.'” and treats damaged structural and connective tissue and prevents bruising. It is not designed for acute pain relief, although chronic pain can often be prevented or relieved. Use on area of chronic joint pain, including fibromyalgia or osteoarthritis.

Castor oil is astringent and helps to stabilize hypermobile joints, such as neck subluxations. It is used in to reduce benign masses and swellings, including ovarian cysts, breast cysts, varicose veins, swollen lymph glands, enlarged liver or spleen and lipomas. Gentle castor oil massage to the lactating mother’s breasts improves the secretion of milk.

Apply castor oil to large areas of nerve involvement or organ dysfunction such as an involved leg or as an abdominal pack for an affected liver, menstrual pain, constipation or general abdominal discomfort. Use it on burns, bedsores, rashes, skin itch, cracked heels, torn cuticles and minor cuts or wounds.

The leaves are poisonous, but they may be steamed and directly applied externally to relieve pains from bruises, injuries and stiffness, aches and pains, rheumatism, arthritis, lumbago and bursitis.

Also, apply it to infected skin, including warts and fungus, pimples or stretch marks. Castor oil is used in the treatment of disorders of the nervous system, including epilepsy and paralysis. Also apply it to neuralgia, foot neuropathy and sciatica.

Castor oil is extremely messy, so compliance becomes a big problem. Traditionally, it is applied as a moist pack. A castor oil ointment is available as a water-soluble gel. It penetrates completely, leaving no residue.

The energetic characteristics of castor oil are a good match with the typical fibromyalgia patient. The treatment tends to be a little on the slow side in fibromyalgia. but, long term use can be very effective.

Michelle Bennett is a professional herbalist practicing in Seattle, Washington, who had received some bad news from her dentist. Her mouth was full of gum disease, with a full set of pockets that averaged 9.5 mm. Resolving to forgo periodontal treatment and bone grafting. Michelle set out on an intensive natural regime, using gotu kola mixed with castor oil as a daily gum pack. Her dentist eventually retracted the recommendation for periodontal procedures. In fact, he was so encouraged that he asked her to consult with him on gum disease cases in his practice.

Castor oil, taken internally, treats “udavarta” conditions in which vata in the digestive tract has become reversed. Bowel loosening castor oil will normalizing the vata of the large intestine.

You can stay young… longer

How to Prevent Sickness