Gout refers to a certain form of inflammation of the joints and swellings of a recurrent type. Although chronic in character, it occurs in acute attacks. It is a disease of the wealthy and chiefly affects middle-aged men. Women, after menopause, are also sometimes affected by this disease. 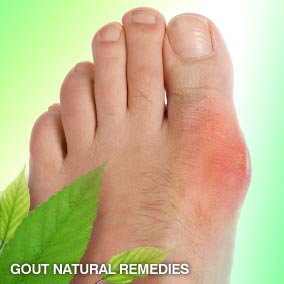 Causes and Symptoms of Gout

An attack of gout is usually accompanied by acute pain in the big toe, which becomes tender, hot, and swollen in a few hours. It may also similarly affect other joints such as die knees and wrists, and sometimes more than one joint may be affected at a time. The attack usually occurs at midnight or in the early hours of the morning when the patient is suddenly awakened. The acute attack generally lasts for a week or so. During this period, the patient may run a slight fever, and feel disinclined to eat. A serious complication of gout is the presence of kidney stones containing uric acid. In some cases the kidneys become damaged and do not function properly.

The chief cause of gout is the formation of uric acid crystals in the joints, skin, and kidneys. Uric acid is an end product of the body’s chemical processes. Those affected by gout have a higher level of uric acid in the blood than the normal, due either to formation of increased amounts or reduced amounts of acid being passed out by the kidneys in the urine. This uric acid usually remains dissolved in the blood. But when the blood becomes too full of it, the uric acid forms needle-shaped crystals in the joints which bring about attacks of gout. Other causes of this disease are heredity, alcoholic drinks, regular eating of foods rich in protein and carbohydrate, lack of proper exercise, and stress.

Cherry: The cherry, sweet or sour, is considered an effective remedy for gout. This was discovered by Dr Ludwig W. Blan some forty years ago. Himself a gout sufferer, Blan found the use of cherries to be miraculously effective in his own case, and he published his own experience in a medical journal. Subsequently many people with gout used this simple therapy with great success. To start with, the patient should consume about fifteen to twenty five cherries a day. Thereafter, about ten cherries a day will keep the ailment under control. While fresh cherries are best, canned cherries can also be used with success.

Vegetable Juices: Raw vegetable juices are protective against gout. Carrot juice, in combination with the juices of beet and cucumber, is especially valuable. Beet juice – 100 ml and cucumber juice – 100 ml should be mixed with 300 ml of carrot juice to make 500 ml of combined juice and taken daily.

French Beans: The juice of French or string beans has also proved effective in the treatment of gout. About 150 ml of this juice should be taken daily by die patient suffering from this disease.

Apple: Apples are regarded as an excellent medicine for gout. The malic acid contained in them is believed to neutralise the uric acid and afford relief to the sufferers. The patient is advised to take one apple after each meal.

Banana: Bananas have been found beneficial in the treatment of gout. A diet of bananas only for three or four days is advised. A patient can take eight or nine bananas daily during this period and nothing else.

Lime: Lime is also used as a remedy in gout, vitamin C is known to prevent and cure sore joints by strengthening the connective tissues of the body. The citric acid found in lime is a solvent of the uric acid which is the primary cause of this disease. The juice of half a lime, squeezed into a glass of water, should be taken twice daily.

For an acute attack, there is no better remedy than a fast of orange juice and water. In severe cases, it is advisable to undertake a series of short fasts for three days or so rather than one long fast

After the acute symptoms subside, the patient may adopt an all-fruit diet for another three or four days. Thereafter, he may gradually embark upon a well-balanced diet of natural foods, with emphasis on fresh fruits, raw vegetables, and sprouts. The patient should avoid all purine and uric acid-producing foods such as all meats, eggs, and fish; tea, coffee, sugar, white flour and its products; and all canned, processed, and fried foods.

A warm-water enema should be used daily during the period of fasting to cleanse the bowels. Epsom salts foot baths are advised twice daily. About 250 gm – 500 gm of these salts may be added to tolerably hot water for this purpose. Full Epsom salts baths should also be taken three times a week. The baths may be reduced to two per week later. Cold packs, applied to the affected joints at night, will be beneficial. Fresh air and outdoor exercise are also essential. The patient should eliminate as much stress from his life as possible.

Natural Cures for Depression: How to Treat Depression Naturally