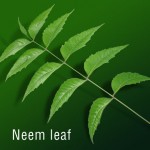 Neem has been used in a varietyi of ways both for personal and community health. Neem leaves, fruits, flowers and Bark contains antibacterial, antiviral, antifungal, antinflammatory and also acts as a  contraceptive agent. Our indigenous knowledge and resources are made use of on an increasing scale as low-cost, effective ingredients for the realization of the lofty goal of ‘Health for all’. This native Indian tree has been identified on the five-thousand-year-old seals excavated from the Indus Valley Civilization”. Today the margosa (Neem) is valued more highly for its capacity to exercise the demon of disease than the spirit of the dead, and an image of the folk goddess Sitala can often be seen suspended from a neem branch where she guards against small pox. Renowned for its antiseptic property, the neem tree is thought to be particularly protective of women and children. Delivery chambers are fumigated with its burning bark. Neem seed oil has been chemically tested as an external contraceptive, used by women as a spermicide. Neem is used in pyrexia, diabetes, urinary problems, filarial worms, respiratory disorders, dermatological disorders, gynecological disorders and by way of external use for eyes, piles and fistula, wounds, hair, dental hygiene and as fertility regulatory material and in addition to its uses in ophthalmic problems.

Neem leaves are now known to contain nimbin, nimbinene acetylnimbinase, nimbandial, nimbolide and quercentin. Neem leaves help in the treatment of neuromuscular pains. Neem leaves are also reported to remove toxins, purify blood and prevent damage caused by free radical in the body by neutralizing them. Neem leaves are reported to be beneficial in eye disorders and/insect bite poisons. Tender leaves are effective in parasitic infections. A 10% aqueous extract of tender leaves has been found to posses anti-viral properties. Studies on plasma clotting time using Russell’s viper venom have proved that the leaf extract contains a clotting inhibitor. This justifies its use in the treatment of poisonous bites. Neem leaves have shown significant antiulcer activity and anti-inflammatory effect. Extract of Neem leaves have shown reduction in the frequency and seventy of stress-induced gastric mucosal lesions.

Neem bark is cool, bitter, astringent, acrid and refrigerant. It is useful in tiredness, cough, fever, loss of appetite, worm infestation. Nimibidin found in Neem bark is now known to be antipyretic and non-irritant, and it has found to be effective in the treatment of skin diseases such as eczema, furunculosis, arsenical dermatitis, burn ulcers, herpes labialis, scabies and seborrheic dermatitis. Nimbidin and sodium nimbidmate contained in Neem bark are reported to possess spermicidal activity. Extracts of bark have potent diuretic and anti-inflammatory properties.

Neem flowers are used in balancing of the body heat and cough. They are astringent, antihelminthic and non-toxic.

Antibacterial Compounds: Recent reports focus on antibacterial activities in the mouth, specifically in gum disease and cavities, as well as preventing sexually transmitted diseases and as a vaginal contraceptive.

Antifungal Properties: The current research proved its antifungal properties which control fungi that can cause athlete’s foot, ringworm and Candida, the organism that causes yeast infections and thrush.

Anti-Inflammatory: Nimbidin, a component of Neem, has been show to posses potent anti-inflammatory and antiarthritis activity. Nimbiden suppresses the functions of macrophages and neutrophils involved in inflammation.

Antioxidant Compounds: The process through which free radicals are created, is a normal function of the body but the resulting molecules are unstable and can damage other cells. A series of disorders, including cardiovascular disease, eye health, cataracts and macular degeneration, age-related neurodegeneration (decline of the brain cells and nervous system) and even cancer occurs due to high levels of free radicals. Neem protects against chemically induced carcinogens and liver damage by boosting antioxidant levels.

Antiviral Compounds in Neem: Neem inhibits the growth of Dengue virus, a hemorrhagic fever related to Ebola, and interferes with the reproduction of the coxsackie B virus, one of a group of “enteroviruses” that are second only to the common cold as the most infectious viral agents in human beings.

Cancer: Neem’s efficacy in killing cancer cells or boosting the body’s immune system to protect it from damage. Neem or its isolated compounds have shown impressive action against a wide variety of human cancer cell that include colon, stomach, lung, liver, skin, oral, prostate and breast.

Potential Contraceptive Properties of Neem: Use of Neem as either a pre or post coital contraceptive, noting that it prevented proliferation of sperm cells in concentrations as low as 0.05 to 1%. Purified extracts of Neem contained immunomodulators that stimulate the cells and macrophages that terminate pregnancies. Fertility was regained after one or two cycles with no apparent impact to future pregnancies.

The Sodium Nimbinate is the main component of the Neem oil acts as “Spermicidal agent”. So it is an ideal vaginal contraceptive, not only used in Traditional medicine, even in modern era so many products of Neem oil used as contraceptive purpose. It proves that only one ml. of Neem oil immobilized all the sperms with in 30 seconds. So it is safe adopted female contraceptive. The effect is mediated by its toxic and degenerative action on the sperm, rather than its hormonal effect.

Neem has been shown to be a powerful, relatively inexpensive birth control agent for both men and women. Cotton soaked in Neem oil was kept in the vagina for fifteen minutes before intercourse. This killed the sperm. Neem oil based vaginal creams and suppositories are extremely popular in India. Nonirritating and easy to use, they are almost 100 percent effective. Neem extract reduces fertility in male -without hitting libido or sperm production. Neem leaf tablets taken for one month produced reversible male infertility but did not affect sperm production or libido. This is the first male birth control pill. Chewing a handful of Neem leaves every day prevents pregnancies.

Diabetes: With its extremely bitter properties, Neem has been used in disorders caused by overeating sweets. Recent studies have focused that Neem’s hypoglycemic effect. One tablespoon (5ml) of Neem leaf juice daily on an empty stomach each morning for three months. An alternative is to chew or take in powder form ten (10) Neem leaves daily in the morning. Because Neem has been found to reduce insulin requirements by upto 50 percent, without altering blood glucose levels, many of these pills are made of essentially pure, powdered neem leaves. (See also : Diabetes Complications and Relief from Exercise and Yoga, Dietary Management for Diabetics )

Immuno stimulatory Compound: Immuno stimulating properties of neem is most important benefit. It boosts both the lymphocytic and cell-mediated systems, including “Killer T” cells which are able to destroy microbes, viruses and cancer cells by injecting toxic chemicals into the invaders.

Liver functions: It helps to protect the liver from damage, which in turn helps to cleanse the blood. Neem leaf minimize, chemically induced liver damage by stabilizing levels of serum marker enzymes and boosting levels of antioxidants, like those found in vitamin C and E and in natural carotenoids, which neutralize free radicals and prevent damage.

Neuroprotective Effect: Antioxidant compounds in neem help to prevent brain damages, who had suffered a stroke by enhancing lipid peroxidation and increasing ascorbic acid (Vitamin C) in the brain.

Oral Diseases: Another traditional use of neem has been to chew the neem sticks. It is still used to clean teeth in rural parts of India. Antimicrobial properties that help to reduce plaque and gingivitis.

Stress: Low doses of Neem leaf extracts have sedative effects. The effect disappears at high doses, approximately 400 or 800 milligrams per kilograms of body weight. It also reduces anxiety and stress.

Arthritis: Neem has a long history of relieving inflamed joints. Neem not only helps in reducing inflammation but also suppress the pain. It is also useful in Rheumatism.

Malaria: Malaria is quite common in India and throughout the tropics. Neem leaf extracts helps to prevent normal development of the malaria virus. Even though Neem may be effective against the parasites that carry malaria, it has not been shown to prevent the malaria infection once it’s in the body. Dried margosa leaves are burned as mosquito repellent.

Skin Diseases: Neem has been highly successfully against harmful fungi, parasites, and viruses. It has been most helpful in treating a variety of skin problems and diseases including psoriasis, eczema and other persistent conditions. Psoriasis is successfully treated with Neem oil. ( See also : Natural cures for fungus toenail infection )

Vitiligo: Vitiligo is believed to be an autoimmune disorder that causes patches of skin to lose its color. The dosage is of four grams of Neem leaves three times a day, ideally taken before each meal. Neem oil applied to the affected areas could aid in the reversal of discoloration.

Viral Diseases: In India, Neem is also used to treat viral diseases such as smallpox, chicken-pox. Neem has antibacterial characteristics as well.

AIDS: Some of the best news is that Neem may help in the search for prevention or a cure for. AIDS. AIDS may possibly be treated by ingesting Neem leaf extracts or the whole leaf or by drinking a Neem tea.